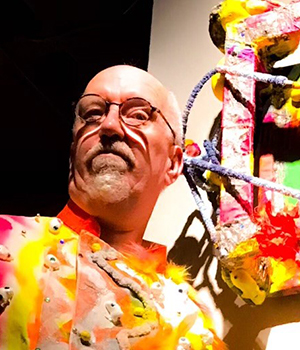 Edwin Shelton presently is the art teacher at Marquette Catholic High School in Michigan City, Indiana This will be his sixth year. He was permitted to be an exchange teacher in Zibo, China which still influences his artwork. His other jobs have included being an art teacher at two Catholic middle schools.

Edwin Shelton was also a part-time art instructor at the John G. Blank Center for the Arts which became the Lubeznik Center for the Arts in Michigan City, Indiana. He was promoted to a full-time position as the exhibitions and program director for two years. He later focused on the programs and education.

Edwin Shelton and Laurel Izard created ceramic objects, jewelry, and ornaments for almost twenty years together. They lived in Madison, Wisconsin; Richmond, Virginia; Woodstock, Illinois; Chicago; and currently Michigan City, Indiana. Edwin Shelton majored in sculpture at Virginia Commonwealth University and earned his BFA. He achieved his MFA in sculpture at University of Wisconsin-Madison. Edwin Shelton completed his final credits at the Skowhegan School of Painting and Sculpture in Skowhegan, Maine.

Shelton has been renting a studio in the St. Mary Studios in Michigan City, Indiana for about a year and a half. The space has allowed him to create large sculptures. It is conveniently located next to Marquette Catholic High School.

I strive to make sculptures that viewers have likely not seen before. I work to provoke the blend of joy with mysteries. I assemble discarded objects. They are given a “skin” of fabrics and upholstery thread with fluorescent paint, paper mache, faux jewels, glitter, etc. The non-representational sculptures range from smaller objects to large assemblages. The some of the reliefs also have pendulum elements that can be moved gently moved by the viewers. My sculptures distill over six decades of creative and spiritual experiences.